Today we went and saw the new Tinker Bell Movie. This was the only movie theater showing of the movie. At first, the boys weren't so sure about going to a "girl" movie, but when I asked them to do it for mommy (and I promised to buy popcorn) they were excited. Nate however, said that he would go for popcorn but then he wanted to sleep through the movie. I said Ok.

Upon arriving at the theater, we bought out popcorn and headed to theater 1. Nate realized all of the other kids (boys and girls) that were at the movie and thought that he might be ok checking it out.

The movie was cute. Nate and Zach even laughed a few times!! It starts out with the creation of Tinker Bell and then joins her on her travels of growing up. The movie had a tear moment at the end, however I don't want to spoil the ending. The movie comes out to Disney DVD and Disney Blu-Ray (for those of you that have daughters (or sons) that would LOVE this movie) on October 28th. :)
Posted by veddemon at 9:48 PM 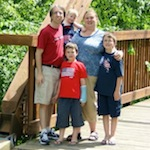 Welcome to Monica's World!!! Home of stuff that happens in my world! Now that my boys are on Summer Vacation, I hope to blog about all the EXCITEMENT in my world.
Anyone that knows me, knows that my family is the most important piece of "my world". My husband and I have been married for 11 years (July 29th), Nathaniel is almost 10 (Aug. 29), Zachary just turned 7 (June 2) and Mackenzie is 21 months (Sept. 22).